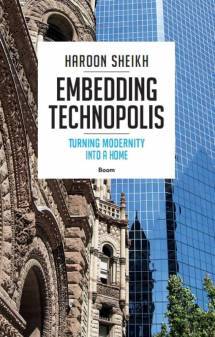 The global village is under pressure. In order to protect local communities and their traditions, walls, real and symbolical, are erected across the globe. In Turkey, Russia and China cosmopolitanism seems to be giving way to rediscoveries of tradition like Ottomanism, Eurasianism and Confucianism.

Psychopolitics
In Embedding Technopolis, Sheikh rethinks modernity and tradition and gives insight into their complex relationship. From state-led capitalism in East Asia to democracy in India and German industry, Sheikh shows how ancient traditions surprisingly persist in our contemporary world and thrive symbiotically with modernity. At the same time, he develops an innovative method of psychopolitics to analyze the logic of how societies deal with modernization.

Haaron Sheikh
Haroon Sheikh (1980) studied Public administration, Political science and Philosophy in Leiden and Oxford. He teaches philosophy at vu University in Amsterdam and he is head of research at Dasym, an independent investment firm from the Netherlands. At Dasym, Sheikh works with a multidisciplinary team to study the impact of changing global relations and the implementation of technology in daily life. Sheikh regularly writes for several Dutch media and his work has been featured in Foreign Affairs and the Financial Times. He previously published The Rise of the East at Boom Publishers.